A world record tennis crowd watched Kim Clijsters defeat Wimbledon champion Serena Williams 6-3, 6-2 in an exhibition in Brussels. The crowd of 35,681 at King Baudouin Stadium on Thursday surpassed the previous record of 30,472 set in 1973 at the Houston Astrodome in the Battle of the Sexes match between Billie Jean King and Bobby Riggs.

Clijsters was originally scheduled to play Belgian Justine Henin, but Henin withdrew after injuring her elbow at Wimbledon. Top-ranked Williams agreed to replace Henin despite a foot injury. The match was umpired by tennis great Martina Navratilova. French Open champion, Francesca Schiavone, was also in attendance.

I wish I could have seen this match but it seems like Serena didn't exert herself too much in this matchup- afterall it was an exhibition match. Can't wait to see Clijsters play Serena in US Open! Serena has some major unfinished business to complete this year in NY. 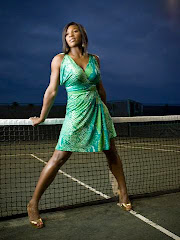 PROFILE OF A CHAMPION

STAY IN STEP WITH SERENA

Serena: The Fight of a Champion

TENNIS WORD OF THE WEEK

Lob - a stroke in tennis where the ball is lifted high above the net with the intention of it going over the opposing player in the case of him being close to the net, thus nearly guaranteeing the point.

WTA "Looking For A Hero?" Ad 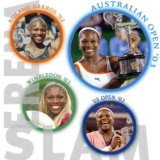 Serena was the last person (male or female) to hold all four Major Grand Slam Titles (at the same time): '02 FRENCH OPEN, '02 WIMBLEDON, '02 U.S. OPEN and '03 AUSTRALIAN OPEN. This accomplishment saw Serena join immortals of the game such as the late Maureen Connolly, Margaret Court, Steffi Graff and Martina Navratilova, the only other (female) players who have won four grand slam titles in a row.